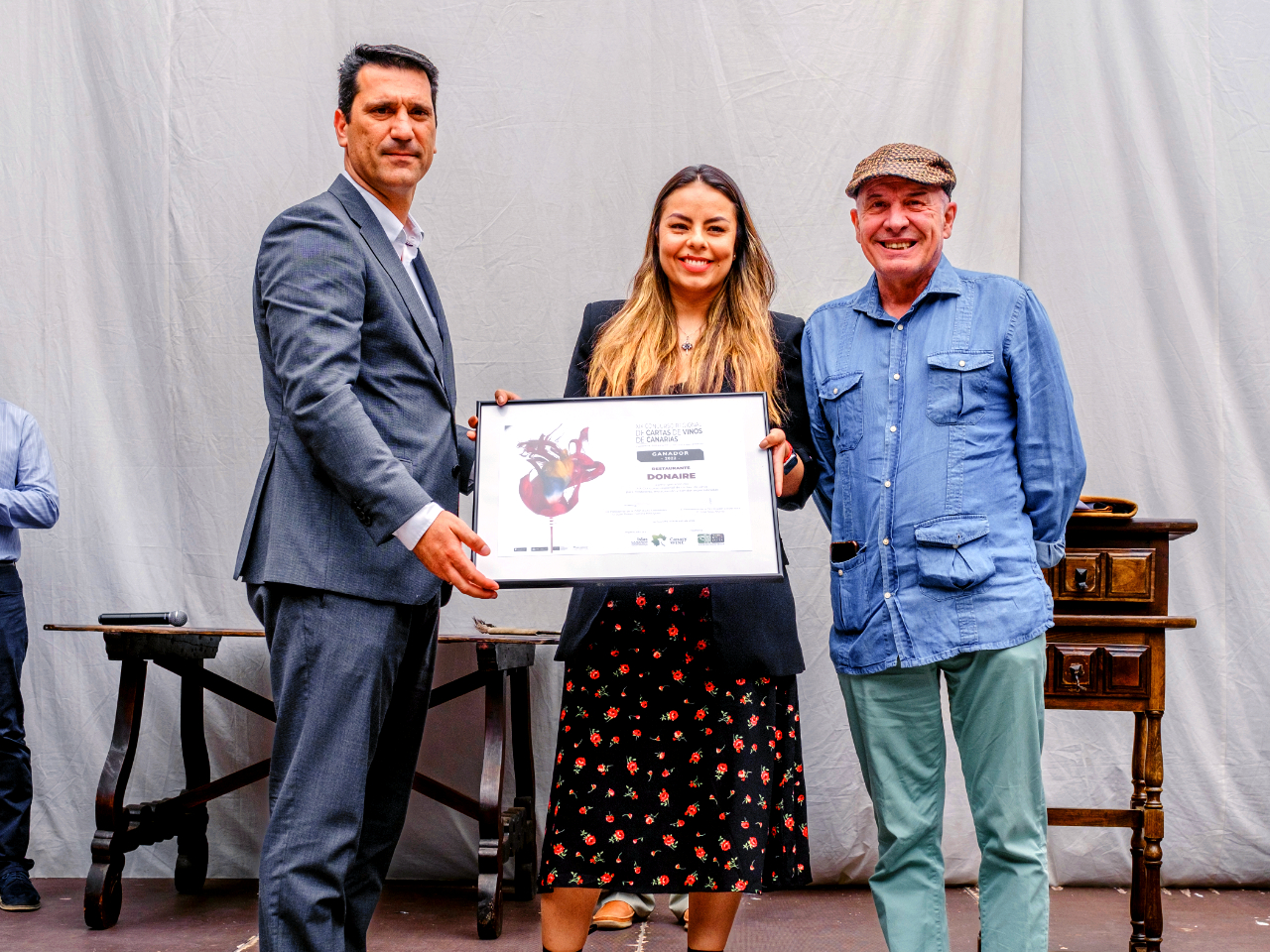 By Infoconceptos July 6, 2022 No Comments

The Donaire Restaurant, located in the Hotel GF Victoria *GL, on the coast of Adeje (Tenerife), has been unanimously chosen by the winning Jury of this edition of the contest for Hospitality, Catering and Specialized Shops.

The Jury, which has been chaired by the Sommelier Javier Gila, one of the best professionals in Spain, has unanimously chosen the Donaire Restaurant – located in the Hotel GF Victoria *GL, on the coast of Adeje ( Tenerife) – winner of the XIX Edition of the Regional Contest of Wine Lists for Hotels, Restaurants and Specialized Shops – organized by the Regulatory Council of the Protected Designation of Origin Canary Islands Wine in collaboration with the Designation of Origin Ycoden Daute Isora – and whose purpose is to improve and join efforts in the presentation and content of the wine lists of Canarian restaurants, and that customers and consumers can feel more informed and knowledgeable about the wines of the Designations of Origin of the Canary Islands.

Likewise, the La Aquarela Restaurant, located in Anfi in the south of Gran Canaria, has been recognized with a special second prize in recognition of its commitment to Canarian wines and the San Hô Restaurant, located in the Royal Hideaway Corales Beach – Adults only *GL (Adeje, Tenerife) has won the Award for Best Presentation and Menu Design.

The jury, in addition to the presentation of the Charter, has valued the breadth of information, the number of references and the types in the different groups of wines of the Canary Islands Designations of Origin and of any other Designation of Origin both national and international, which offers the winning establishment to its increasingly large clientele.

AWARDS PRESENTATION ACT
The award ceremony took place yesterday [Tuesday, July 5] at the Old Convent of San Francisco de Garachico in an act that was attended by Juan Rubén Ferrera Rodríguez, president of the Canary Islands Protected Designation of Origin – Canary Wine and José Sosa Afonso, president of the Ycoden Daute Isora Denomination of Origin, who presented the award for the Best Canary Wine List to the director of the Hotel GF Victoria *GL and his sommelier, Gustavo Hernández Ramos and Paula Andrea Rojas Hernandez, respectively.

The Councilor for Culture and Sports and the First Deputy Mayor and Councilor for the Primary Sector of the Garachico City Council, Airam José Trujillo Rodríguez and José Elvis de León Rodríguez, respectively, were also present.

DONAIRE RESTAURANT
The Donaire Restaurant is the great commitment to haute cuisine by Grupo Fedola and GF Hotels.

Located on the 4th floor of the Hotel GF Victoria, a *GL hotel on the coast of Adeje (Tenerife), Donaire gastronomically embodies the philosophy of the hotel chain, combining values ​​such as proximity, deep roots and sustainability with exclusivity and innovation.

The experience, professionalism and attention to detail in the relentless pursuit of excellence make the establishment an oasis of elegance and good taste.

THE AQUARELA RESTAURANT
La Aquarela Restaurant is located in front of the sea, next to Anfi in the south of Gran Canaria.

Inaugurated more than 30 years ago, La Aquarela was born with a single objective, which is simply to offer the pleasure of tasting careful cuisine in a privileged environment.

SAN HÔ RESTAURANT
The union of the best of Japan and Peru in a Canarian context is the proposal made by the San Hô Restaurant, located in the Hotel Royal Hideaway Corales Beach – Adults only *GL (Adeje, Tenerife).

The term Nikkei encompasses emigrants of Japanese origin and their descendants, in this case, in Peru. This origin and the mixture of its culinary tradition with the Andean country have given rise to this type of cuisine, which has already become a world gastronomic trend and of which San Hô makes an original proposal with Canarian products as part of it.

This website uses cookies to improve your experience while you navigate through the website. Out of these, the cookies that are categorized as necessary are stored on your browser as they are essential for the working of basic functionalities of the website. We also use third-party cookies that help us analyze and understand how you use this website. These cookies will be stored in your browser only with your consent. You also have the option to opt-out of these cookies. But opting out of some of these cookies may affect your browsing experience.
Necessary Always Enabled
Necessary cookies are absolutely essential for the website to function properly. These cookies ensure basic functionalities and security features of the website, anonymously.
Functional
Functional cookies help to perform certain functionalities like sharing the content of the website on social media platforms, collect feedbacks, and other third-party features.
Performance
Performance cookies are used to understand and analyze the key performance indexes of the website which helps in delivering a better user experience for the visitors.
Analytics
Analytical cookies are used to understand how visitors interact with the website. These cookies help provide information on metrics the number of visitors, bounce rate, traffic source, etc.
Advertisement
Advertisement cookies are used to provide visitors with relevant ads and marketing campaigns. These cookies track visitors across websites and collect information to provide customized ads.
Others
Other uncategorized cookies are those that are being analyzed and have not been classified into a category as yet.
SAVE & ACCEPT